Pulling Together for Great People Strong Wisconsin ties: Will Hsu, who grew up in Wausau, and Jenny Hsu, a native of Onalaska, are making sure they stay connected to the UW in tangible ways. Photo: Maribeth Romslo/Red Ribbon Studio.

“Will had proposed that we use some of the money for our Great People Scholarship,” says Jenny Hsu, a nurse practitioner in the Twin Cities. “In Asian culture, a lot of people just give cash in lieu of a [wedding] gift. We thought it would be a good idea to put some of that forth for a scholarship.”

Will, who earned degrees in finance, Chinese language and literature, and East Asian Studies at UW–Madison, is a senior finance manager at General Mills in Minneapolis. He heard about the Great People Scholarship while helping the Wisconsin School of Business with fundraising programs and alumni events.

The Great People Scholarship Campaign, which has generated more than $25 million so far for student aid, is the highest priority on campus. The scholarships are part of aid packages put together by the Office of Student Financial Aid, and they often include student and family contributions, loans, and work-study employment. About five hundred students received these scholarships this fall, and that number will rise significantly in future years as endowment funds are made available.

Both Will and Jenny Hsu have graduate-school debt: Will for earning an MBA from the Harvard Business School; Jenny for a master’s degree in nursing from the University of Minnesota.

“I have a job; Will has a good job,” says Jenny. “Even though we have loans of our own, we are doing well enough that we are able to pay for those loans. We wanted to give people who don’t have the same opportunities we had going into college and grad school the chance to get an education.”

Will says the connections he formed on campus were strong and lasting. “I learned a lot, and not just from a business standpoint,” he says. “Because I did a couple of majors in the College of Letters & Science as well, it gave me a broader perspective, a wider view of the world, a better understanding.”

A highly motivated undergraduate, he was a house fellow in Cole Hall; a peer learning partner at the Bradley Learning Community; and a coordinator with the Student Orientation, Advising, and Registration program. He also worked for Visitor & Information Programs.

“Without [the university], I wouldn’t be where I am today,” he says. “I believe so strongly in the UW and how it gives people the tools to lead successful lives.”

For those who do either or both by October 3, Will Hsu ’00, his spouse, Jenny, and his parents, Paul and Sharon Hsu, will give to the Great People Scholarship.

“We’re trying to make sure people stay connected,” says Will, a frequent blogger who makes good use of Twitter. “In the last few years, Jenny and I have watched Facebook and Twitter and some of these other types of social media take off. … Our challenge could motivate people to get more involved with the university.”

Visit buckychallenge.wisc.edu to learn more and to take part in the challenge. 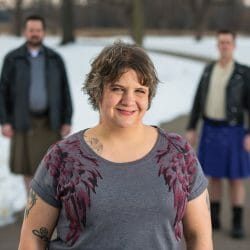