Chancellor Rebecca Blank gazes at a sea of black-clad grads-to-be. In May 2014, commencement was held at Camp Randall for the first time since 1990. For nearly a quarter of a century, the UW had four separate graduation ceremonies at the Kohl Center. The new venue allowed the graduating class to gather in one place and inspired them — not surprisingly — to celebrate by jumping around. At press time, some 5,800 students and 40,000 guests were again expected to mark the major milestone at the stadium this year. For the fourth year in a row, WAA planned to give graduates alumni pins to mark the transition from students to alumni. 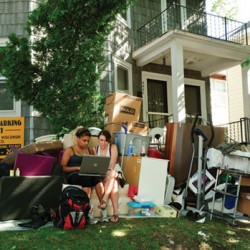