Mimicking some of the mannerisms of a family member who often became drunk at her family’s Christmas dinner helped Carrie Coon win the role of Honey in the Broadway revival of Edward Albee’s Who’s Afraid of Virginia Woolf? Photo: Michael Brosilow/Steppenwolf Theatre Company

Carrie Coon didn’t grow up longing to be in theater. But her talent took her there.

Carrie Coon MFA’06 was on stage at the University Theatre with award-winning playwright Tony Kushner when he visited UW–Madison in 2005 for a reading of his unfinished play about Laura Bush. The two had not rehearsed ahead of time.

Norma Saldivar, a professor of theater who directed Coon one year before in Kushner’s play Homebody/Kabul, was watching from a seat in the house. Kushner began to deliver his dialogue in a quick, clipped fashion. When Coon said her first line, he stopped and simply looked at her. Kushner, who wrote the play Angels in America and the screenplay for the movie Lincoln, needed a moment to react to what the theater student was doing with his words.

“He was struck by what she was playing,” Saldivar says. And in that moment, she realized, “He sees what we all see in Carrie.”

Now more of those who love theater can see for themselves what Kushner saw then.

Last fall, Coon made her Broadway debut in the Chicago-based Steppenwolf Theatre Company’s fiftieth anniversary production of Edward Albee’s Who’s Afraid of Virginia Woolf? She played Honey, the wife of an academic, and in her hands, the character became a scene-stealer. One reviewer noted that Coon should win a Tony award for “excellent drunk acting.” Another said her scenes left the audience uncertain whether to laugh or cry. The New Yorker simply called her “phenomenal.”

“She brings full life to this character. … She’s always had that ability,” says Saldivar, who attended the play before it ended its Broadway run in March. “There was no doubt in my mind from the very first time I saw her that she had something very special.”

Carrie Coon (right) was cast in the role played by Sandy Dennis in the 1966 movie version of Virginia Woolf. She was nominated for a Tony Award for her performance, along with fellow actors Amy Morton and Tracy Letts (at left), and the Steppenwolf Theatre production received a nomination for best revivial of a play. The awards were to be presented June 9 on CBS. Photo: Sara Krulwich/The New York Times/Redux

Growing up in a small town outside of Akron, Ohio, Coon didn’t see a lot of theater. But when she was ten, she attended a children’s production with a friend. She recalls wondering about the kids on stage, thinking, “I didn’t know kids were allowed to do that. How did they get up there?”

One of five children, Coon spent many weekends watching her younger brothers, which left little time for extracurricular activities beyond athletics. She continued playing sports when she got to high school and was elected class president. One day, while waiting for soccer practice to start, the busy fifteen-year-old stayed after school and auditioned for Thornton Wilder’s Our Town. She landed the role of Emily. “I accidentally got the lead in the play,” she tearfully told her mother.

The production was terrible, she says, but it was wonderful, too. She remembers delivering Emily’s poignant monologue at the end of the play: “Do any human beings ever realize life while they live it — every, every minute?”

“I knew that it was a really important speech, even if I couldn’t articulate why,” Coon says. “I could feel it, and [knew] how powerful it was, and I never forgot about that.”

Coon won an academic scholarship to the University of Mount Union in Alliance, Ohio, less than an hour from home. She played soccer and ran track, majored in English literature and Spanish, studied abroad in Spain, and set her sights on being a linguist.

Meanwhile, she continued to effortlessly nail it in auditions.

During her freshman year, Coon spotted a flier seeking actors for William Shakespeare’s A Midsummer Night’s Dream. She auditioned and landed the part of Titania, queen of the fairies. She quit the track team after two years, but continued to play soccer, and acted in a handful of plays when she had free time to rehearse during the off-season.

As graduation neared, a theater professor encouraged her to audition for university and regional drama productions. With little preparation, Coon headed to Chicago. Her mother, grandmother, and aunts tagged along for a weekend of revelry and martinis. Erica Daniels, the casting director for Steppenwolf Theatre Company who would later cast Coon in Virginia Woolf, had her first glimpse of the actress at those auditions.

Soon thereafter, the UW offered Coon a scholarship for master’s study. “The faculty members at Wisconsin took such a huge risk with me, because I had no experience and I was fresh out of [college],” Coon says. “So the first thing I got from Wisconsin was pure opportunity.”

At the UW, one of Coon’s responsibilities as a graduate student was to teach acting, something she had not formally studied. “I had to really get to the bottom of how I work, so that I could help other people learn to define their own process,” she says.

The UW’s graduate program also gave Coon the chance to act in Madison Repertory Theatre productions. Her first professional role was familiar: Emily in Our Town. “I [had] this wonderful synchronicity where I got to do that role when I didn’t know what I was doing — and I was fifteen years old — and then I get to come back and do it as a professional,” she says. “Applying your craft in the professional world is something that I think a graduate-level program should prepare you to do, and I felt like that was really possible for me [at the UW].”

After finishing graduate school, Coon did voiceover work for commercials and motion-capture acting for a Madison video-game company. She also did an apprenticeship with the nationally regarded American Players Theatre (APT) in Spring Green, playing small roles in four plays that first summer before getting her chance at bigger parts. She stayed with APT for four seasons, before moving to Chicago and finding work with the Goodman Theatre and the Remy Bumppo Theatre Company.

Coon says playing character roles, such as Honey in Virginia Woolf, is one of the keys to career longevity in the theater. Photo: Stewart Talent Agency.

In Who’s Afraid of Virginia Woolf?, Coon’s character, Honey, wrestles with how she feels about her life and marriage. She also has way too much to drink. It’s a role first played by Melinda Dillon on stage, then by Sandy Dennis in the 1966 movie version that also featured Elizabeth Taylor, Richard Burton, and George Segal.

To prepare for the role, Coon thought about the mannerisms of a cousin who often became drunk at her family’s Christmas dinner. And she watched video of an acting class taught by the late Uta Hagen x’37, who originated the role of Martha in the play’s 1962 Broadway premiere.

“When you’re drunk, you don’t want anyone to know that you’re drunk, and so you’re trying to do everything very carefully,” Coon explains.

The preparation paid off. Charles Isherwood, a reviewer for the New York Times, wrote that Coon “depicts Honey’s vertiginous descent from tipsy to sodden to sickened with hilarious physical precision.”

Before auditioning for the role, Coon spent time walking around her Chicago apartment in a slip, pearls, and high heels, pretending to be a 1950s housewife. She took nips of brandy from the liquor cabinet as she wrote out a grocery list, curled her hair, and put on makeup.

“That was the first time I’d really prepared in that way,” she says. “By the time I got through to the third callback, I just didn’t think there was anybody else who understood [Honey] the way I did — which was pretty presumptuous.”

Landing a role in that legendary play is one thing. Actually playing the role is another.

“It’s very intimidating,” Coon says. “People have a visceral relationship to the first time they saw the film or the play. You can’t think about it, because everybody is going to have an opinion as to what you’re doing and whether it’s right or wrong or good or bad.”

Playwright Albee attended rehearsals for the play and gave notes to director Pam McKinnon, who directed last year’s Tony-winning Clybourne Park. “That was really scary, but also wonderful,” Coon says. “[He] had a great sense of humor and was very self-deprecating, and, actually, was as wonderful as he could be … for as intimidating a character as he is.”

Coon welcomed the chance to play a character who is, in her words, “a little crazy.” The role is quite different from the ingénue and leading-lady parts she has typically played. “The ingénue parts are always like, ‘Marry me, marry me,’ and they cry, and the leading ladies are stoic, and they stand up really straight,” she says. “Playing character roles is fantastic, and that’s also the key to longevity: you’re not going to have a long career if you’re attached to being an ingénue or a leading lady.”

When Coon first stepped onto the New York stage as Honey in October, she worried about sustaining her performance. For one thing, eighteen months had passed since she was selected for the role, and in the meantime, she had played two other roles at Steppenwolf Theatre and a guest role on a television show. For another, the play is lengthy — clocking in at more than three hours — and there were eight shows a week during the Broadway engagement. But Coon soon realized she didn’t have to worry, given that her co-stars included Steppenwolf veterans Tracy Letts and Amy Morton.

“When you’re working with actors like that, the truth is always going to be somewhere on stage for you,” she says. “And you always have that to rely on, so when you’re not feeling it, somebody [else] always is.”

Opening night on Broadway was “pretty electric,” Coon says. Famous people filled the seats, including André De Shields ’70, who played the stage manager to her Emily in Our Town at Madison Repertory Theatre. Coon’s parents, who encouraged her to study acting at the UW when she wasn’t certain of her career path, were also there — as they have been for every one of her plays. On opening weekend, twelve family members rented a loft in Chinatown, attended the play, and celebrated her milestone.

“It’s all kind of a big adventure,” she says. “It always has been.” 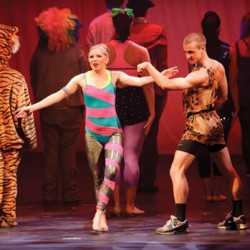