It costs just $50 a year to provide a daily meal to a Kenyan school child such as Molly (left with blue bowl). As chief spokesperson for the World Food Programme in North America, Bettina Luescher MA’85 (below right) uses simple messages to emphasize that hunger is a problem that can be solved. WFP/Rein Skullerud

Hunger kills more people than AIDS, malaria, and tuberculosis combined. But Bettina Luescher MA’85 keeps her message about hunger simple: it’s a problem that can be solved, and people can help.

For $10, you can feed a child in a Kenyan refugee camp for three weeks. Or, for the price of two lattes, you can buy enough lifesaving biscuits to feed an earthquake survivor for sixteen days.

Her job has taken the former CNN anchor to Sudan with rapper 50 Cent and into the guest chair on David Letterman’s late-night talk show to discuss drought in the Horn of Africa and the humanitarian crisis in the wake of the Haiti earthquake.

In an interview with On Wisconsin during a recent visit to campus from New York, Luescher said none of the steps in her career would have taken place without the Fulbright scholarship that brought her to the United States from her native Germany. And she said that coming to UW–Madison, where she lived at Rochdale International Co-op on West Gilman Street, was like landing in “heaven.” You mentioned that coming to UW–Madison really changed your life. What is something you learned or experienced here that you still carry with you today?

[Living at] Rochdale was one thing. There were thirteen students from all over the world, and we had rules and regulations and bylaws. It was like a little predecessor to now working for the United Nations. The other really big thing that happened was I got my first anchoring experience here in Wisconsin. Geraldine Ferraro back then was running [for vice president] with [presidential candidate Walter] Mondale, and they one day came to Madison, Wisconsin, and I covered that for campus TV. Those tapes later helped me to get an internship with CNN.

How did you first become aware of the World Food Programme and what it does?

As a journalist, especially if you’re a TV anchor, you always look for what you’re going to do once you get too wrinkly. I always wanted to be a foreign correspondent, but at a certain point, I thought it would be really wonderful to work for the United Nations, and I wasn’t quite sure how. I suddenly heard there were jobs [at WFP]. I got in touch with them, and we just fell in love with each other. It’s a very hands-on organization with really wonderful work in so many places, over seventy countries, [helping] over 90 million people every year. The stories are just amazing.

WFP’s school meals help increase enrollment and promote regular attendance, especially for girls such as Molly (left). “You can make a huge impact with something small,” Luescher says. WFP/Rein Skullerud

How much do you travel?

I get the chance a few times a year to go to what I call strange places. I was just in Somalia three weeks ago, and Kenya — I went with 50 Cent, which was a hoot. Last year he had traveled to Africa. He saw poverty like he had never seen before, and he decided to do something about it. He has this goal of raising enough funds for 1 billion meals for Africa, and that’s a lot of meals. He has this energy drink called Street King, and for every drink, one meal goes to the World Food Programme. When he saw Somalia, he literally was speechless. We were in this camp with thousands of women and children, and many of these women had walked sometimes for three weeks with their children on their backs, and sometimes they had to leave children behind somewhere along the road — just trying to flee violence and drought and hunger. When you see something like that for the first time, it’s really life-changing, and I think that’s what it was for him, to see misery of that scale and need on that scale.

Is there anything that really sticks with you if you’re having a bad day at work? Is there something you go back to and remind yourself, “This is why we do this work”?

One of the stories I always tell is about when I was in Darfur and I first joined WFP. I brought a BBC reporter, and there was this woman with her children. She had fled from one of the villages and had taken shelter in one of our camps. And she talks about all this misery, [explaining that] the village got burned and what relatives were killed. I’m standing outside of this little piece of shelter, standing in the glaring sun in really hot weather, and she gets out a little stool … and gives me the stool, so I wouldn’t have to stand in the sun. She took care of me and was worried about me, and that was, I think, one of the most amazing moments. It’s just a coincidence that you and I are sitting here now, or in the Western world, being well taken care of. We might as well be women sitting in some camp somewhere around the world.

You always give really simple, tangible examples of how people can help. How much has your broadcast journalism background helped you deliver the message in a way that people understand what they can do?

You once said, “It’s not a guilt trip, it’s a power trip,” in terms of how you appeal to the public on behalf of WFP. What did you mean by that?

You can’t just show misery and disaster and despair. People turn off — we can’t cope with it. [My message is] you can do something. You’re really powerful. Your boss might be nasty, and your boyfriend might not be nice, and maybe your parents’ house was foreclosed, but you can make a huge impact with something small. Last year, WFP gave Molly (left) a small video camera and asked her to record her daily life in the Nairobi, Kenya, slum where she lives. The result was not sad or depressing — it was vibrant and full of hope. “I think the amazing thing is often what grace even people in need have, what dignity they have, what spirit they have,” Luescher says. WFP/Rein Skullerud

You’ve talked about how hard it is to get on traditional media, and you’ve been on the other side. Why do you think that is? Do they just become numb to the story?

Foreign coverage has just been cut down so much. When the Haiti quake happened, it was an incredible outpouring of support and donations and publicity. We were so helped by George Clooney and MTV and Christina Aguilera and Drew Barrymore when they put that MTV telethon together. And then there are other disasters — like those floods in Pakistan — where there’s not much of a response. Are there political issues behind it? Do we like to help [some] more than others? That, I’m sure, sometimes plays a role with it. But it is fascinating to see how some stories become big stories and others don’t, and what triggers it and what doesn’t trigger it.

What do you think is going to change about your job going forward? 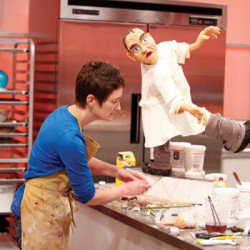