The Young Coleoptera Collection brings the UW bunches of beetles.

You know who really bugs the UW? Daniel Young bugs the UW. And he’s been bugging the UW for years, largely with his own bugs.

Young is a professor of entomology, and he’s also the director of the university’s Wisconsin Insect Research Collection (WIRC). Over the course of seventeen decades, the collection has brought together nearly 3 million curated insect specimens — and nearly 5 million more un-curated specimens and project samples. But Young is also an avid bug collector himself. For the past several years, he’s been donating his own collection to the university: the Daniel Young Coleoptera Collection.

Coleoptera are beetles, the largest order of animals on the globe. (But they don’t include “true bugs” — those are in the order Hemiptera. So Young may bug the UW, but he doesn’t truly bug it.)

“There are more than 300,000 species of beetles,” Young says. “By comparison, there are only about 4,000 species of mammals, and yet that’s what most people think of when they think of animals.”

Young began collecting insects when he was an undergraduate at Michigan State University. “I’d always been interested in them,” he says. “I grew up in Michigan, and I did a lot of fishing — a lot of fly-fishing. That got me interested in taxonomy, in learning what various insects are.”

While still an undergraduate, he worked one summer for a graduate student, who gave him the challenge of organizing a collection of beetle specimens. From there, he just kept collecting. Over the course of his four-decade career, he’s accumulated more than 200,000 specimens of his own. He began donating them to UW–Madison in part to provide an added dimension of worldwide diversity to the WIRC.

“If you’re a Sherlock Holmes-type who likes investigating, insects are perfect,” Young says. “That whole world of the Victorian era, where new species and new genera were being discovered — it’s still available in beetles.”

The Young Coleoptera Collection, as well as the rest of the Wisconsin Insect Research Collection, is housed in two locations: with the Department of Entomology in Russell Laboratories and an annex on the third floor of the Stock Pavilion. 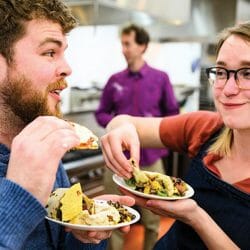