In 1969, Dotty Dumpling’s Dowry began as an eclectic jewelry store in Des Moines. The establishment didn’t begin serving hamburgers until founder Jeff Stanley moved operations to Madison in 1974 and opened up on Monroe Street. The Melting Pot — topped with cheddar, Swiss, and provolone cheeses; smoked bacon; and Dotty’s signature garlic sauce — is the most popular of the restaurant’s 15 original hamburgers. The memorabilia collection keeps growing at Dotty’s current spot on North Frances, but owner Rachael Stanley-Zerwer’s favorite remains a metal sculpture of a motorcycle and its driver that her father acquired for the Iowa shop. Twenty-three basketballs from the Field House are mounted on an oak beam above Dotty’s dining room, representing Badger basketball wins by the undefeated 1913–14 squad and the 1940–41 national championship team. 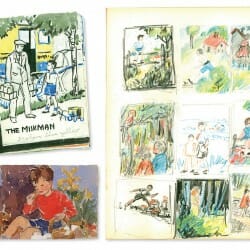