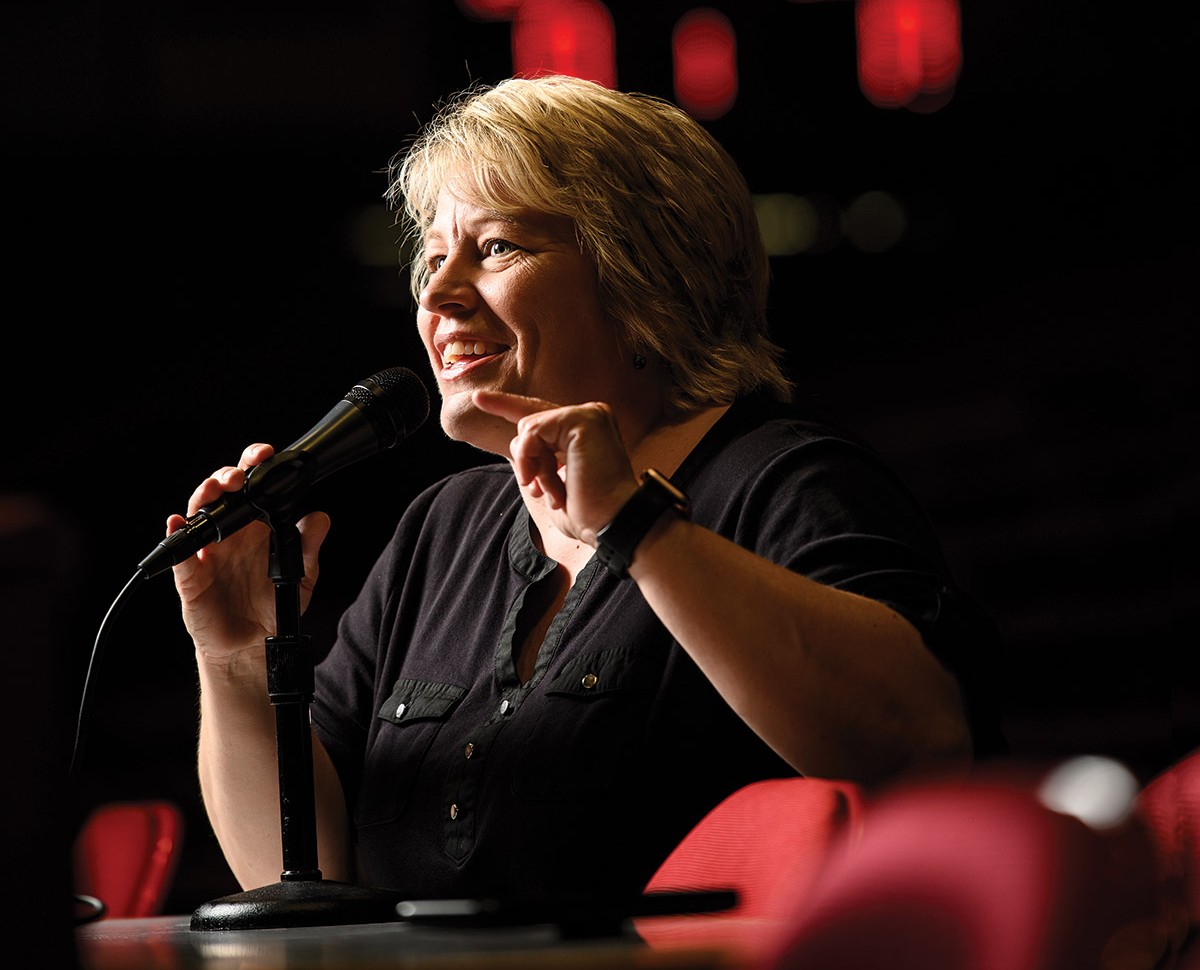 Crowds feed off Oleson’s passion as she introduces the players and calls the points. Bryce Richter

Bonnie Oleson x’94 tears up when discussing the UW women’s volleyball team, recalling last year’s dramatic victory over Nebraska. No, the longtime PA announcer for Badger women’s basketball, volleyball, and softball is not exactly a detached observer. She’s been a UW sports fan ever since her small-town Wisconsin childhood, and crowds feed off her passion as she introduces the players and calls the points.

Oleson began her career as a Madison radio deejay, distinguishing herself with a memorably cheerful voice. The UW–Madison athletic department discovered that voice in 1998 and offered Oleson the chance of a lifetime: announcing games from a front-row seat at the Kohl Center, Goodman Diamond, and the Wisconsin Field House.

Since then, she’s become a fan favorite with her outgoing personality and playful sense of humor. True, she makes the occasional mistake, as all announcers do, but over 21 years Oleson has learned the secret of screwing up in style.

What are the hallmarks of a good announcer?

Less is always more with PA announcing. A good announcer knows how to let a moment happen and not overshadow it.

How much can you let your Badger pride show during a game?

During the regular season, I can be the most partisan announcer in the world. I still try to make the visiting team feel okay, but I’m not going to treat them the way I do our team. At NCAA tournaments, however, I have to be impartial, and that’s hard — especially when you have to say, “Point, Wisconsin!” without being too excited about it.

Being in the Field House is truly unique, and it’s intimidating for visiting teams. It’s full of fans who are cheering the entire time and getting our team ready to go.

Wherever you go, you find a Badger fan. What always amazes me is the loyalty. Through thick or thin, fans are cheering for the teams. I love it when they refer to Badgers as “us” or “we.” “Oh, we won today.” It’s that sense of ownership.

Do you ever get emotional after a big Badger win?

There have been times when I’m announcing that I literally can’t talk. The crowd goes crazy, and I don’t say anything because I’m sitting there crying at the table.

What are the pitfalls of the job?

I try hard to get everything right, but I’m not afraid of screwing up, like mispronouncing someone’s name. I’ve called myself out for making mistakes and gotten the crowd laughing with me. It’s okay not to take yourself too seriously.

What is the significance of having a woman announce for women’s sports?

Other sports-info people have told me it’s so cool to have a woman announcer. You don’t find much of that at other schools. I like that girls can come and see me announcing — it opens their eyes. It’s the “Hey, I can do that” factor.