Tionna Williams x’19 finished her first season for the Badger women’s volleyball team 180 degrees from where she started.

By the end of that season, the six-foot-two-inch middle blocker, now a sophomore, led the team in blocks and ranked fourth in the Big Ten with 1.31 blocks per set. But the player who garnered high expectations as a top-ranked high school prospect from Fort Wayne, Indiana, fought nerves at first. Early on, Wisconsin coach Kelly Sheffield said Williams was on the right track but “had a long ways to go.”

Williams admits she didn’t anticipate the pressures of college athletics, and she was battling personal turmoil following the death of a close friend. But the turning point came when she found herself defending her devotion to the game to her coaches.

“I wanted to prove to them and my teammates that I’m all in, and I’m here to stay, and this is what I want to do,” she says.

Highly self-critical, Williams just needed a little prompting. She began exhibiting more confidence on the court and attracted the national spotlight. Her 13 blocks and 14 kills in victories over Illinois and Northwestern won her Big Ten defensive player of the week honors.

The team advanced to the Sweet 16 of the NCAA tournament and came into the 2016 season ranked fourth. And this October, the Badgers were ranked number-one for the first time in program history.

This fall, Williams picked up where she left off. She has continued winning Big Ten defensive player of the week honors, including a nod for her eight blocks in the Badgers’ road win over number two Texas.

“We all have unfinished business,” Williams says. “We are good enough, we can do this, [and] we worked harder than any other team in the country. This is our year.” 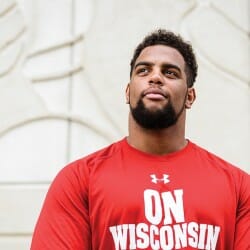