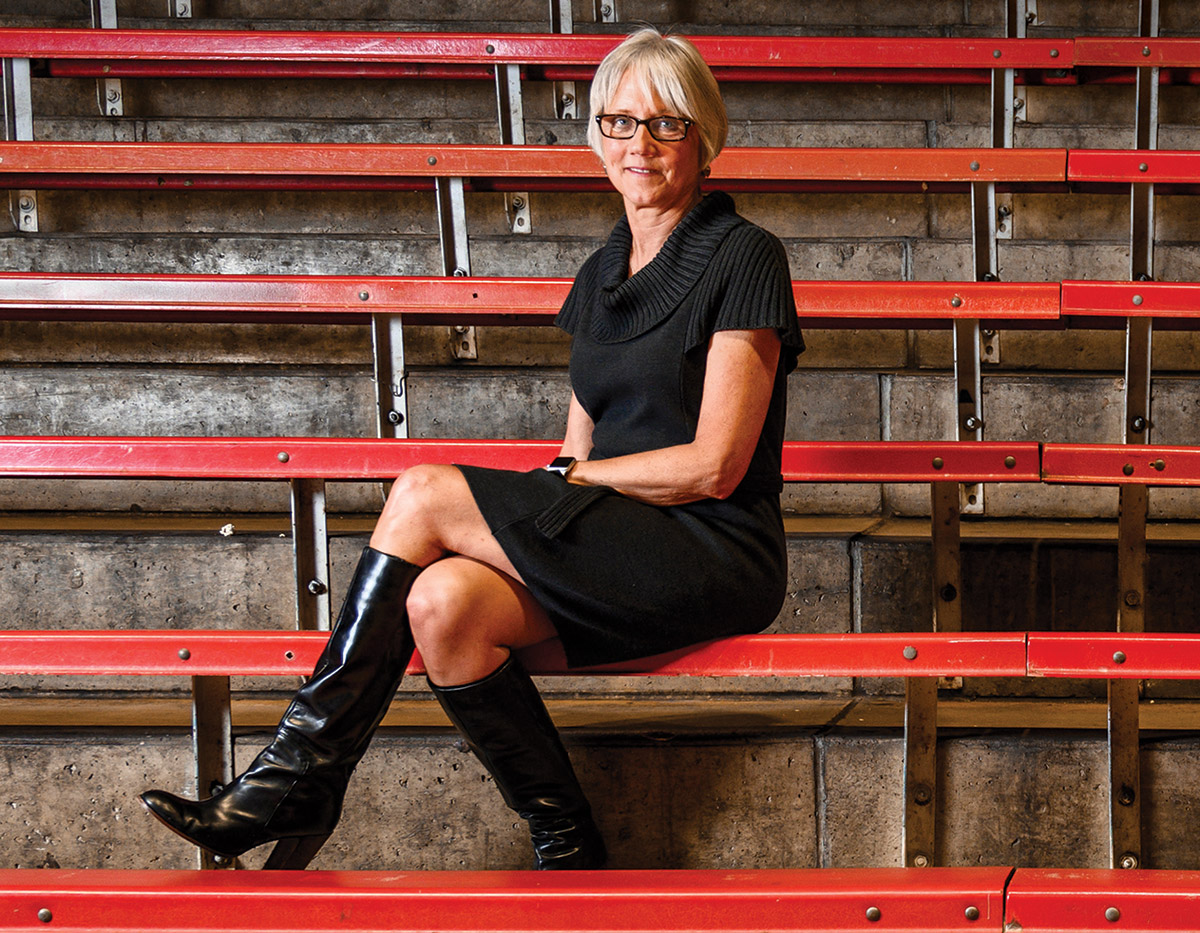 The success of the women’s volleyball team at the Wisconsin Field House is a highlight of Gawlik’s tenure as a top UW athletics administrator. Bryce Richter

Terry Gawlik remembers the day when Title IX became federal law in 1972. She was a successful multisport athlete at her Texas middle school, where her coach broke the news: “This is a great day for women’s sports.”

It would be hard for her to forget. As a UW senior associate athletic director, Gawlik oversees 10 sports programs and is in charge of the athletics department’s ongoing compliance with Title IX — the sweeping statute that prohibits sex discrimination in any educational program that receives federal funding. Although there were efforts early on to exempt athletics, the mandate is now fully entrenched in intercollegiate competition: men and women must have equal opportunities.

The stacks of reports sprawled on Gawlik’s desk serve as a tangible reminder of her task. To comply with Title IX, athletics departments must provide equitable access to sports offerings, athletic scholarships, and all other program areas, such as equipment, travel, facilities, and coaching. The first criterion can be met in several ways. The UW applies the proportionality rule — demonstrating that its sports opportunities for men and women are “substantially proportionate” to its respective enrollment numbers. Enrollment by gender is roughly equal, but it fluctuates each year.

“People have a misconception that Title IX tells you to drop sports,” Gawlik says, noting that the UW’s baseball team was terminated in 1991 only because of a department-wide budget crisis. “No, it doesn’t. It tells you to be in compliance.”

The UW added women’s athletics, which had existed as club teams, to its intercollegiate program in 1974. Although the budget grew from $118,000 to $1.1 million by 1989, a complaint was filed with the regional Office of Civil Rights (OCR) against the athletics department, citing slow implementation — one of the first such measures in the nation. Gawlik, who arrived at the UW in 1994, helped to develop various plans for compliance while meeting financial concerns. The university and OCR went back and forth for 12 years. “They told us, ‘You better be spot on,’ ” Gawlik says, referring to the proportionality numbers.

By 2001, the UW had instituted strict roster management — calculating target participation numbers for each team — and had added women’s lightweight rowing, softball, and ice hockey. Women made up 52.6 percent of the UW’s student-athletes, effectively matching the 53.3 percent of total enrollment. OCR then dropped the complaint.

The right mix of sports and roster sizes is delicate. Rosters fluctuate, and even a practice player counts as a participant. Gawlik tracks the numbers closely — not only participation, but also practice times, support services, and expenses for travel, recruiting, and equipment.

There is no plan to add or subtract sports. “Right now, our numbers match up,” she says. “We’re offering the sports that we would like to offer.” She references assistant women’s rowing coach Monica Whitehouse ’14, who walked on to the UW rowing team her freshman year and then represented Team USA at the 2016 World Rowing Championships. “That, to me, is what participation opportunity is,” Gawlik says.

As the highest-ranking female administrator in the athletics department, Gawlik has had a front-row seat to the exponential growth in women’s sports. Before arriving at the UW, Gawlik coached collegiate women’s basketball, volleyball, tennis, and track. Her introduction was in the early 1980s at the University of Mary Hardin–Baylor in Texas, where she coached two sports while earning her master’s degree. “I didn’t have any assistants. I also taught classes, half the time I was the trainer, I always drove the van, and I was doing all the recruiting and film,” Gawlik recalls, laughing.

Since Title IX, there’s been a 260 percent increase in the number of female athletes at the UW. The women’s sports budget has grown to $24.5 million, more than 50 coaches are on staff, and the 12 teams have more than a dozen national championships combined (including ice hockey earlier this year). When asked where women’s athletics would be today without Title IX, Gawlik takes a moment to ponder.

“Unfortunately, there’d be a lot of women and young girls out there not having the opportunity to play,” she says. “But I also think that we would have found a way. Maybe not at this type of level. But women are competitors — we don’t like to sit the bench.”