Track superstar Alicia Monson x’20 shows what it means to be “Badger tough.” 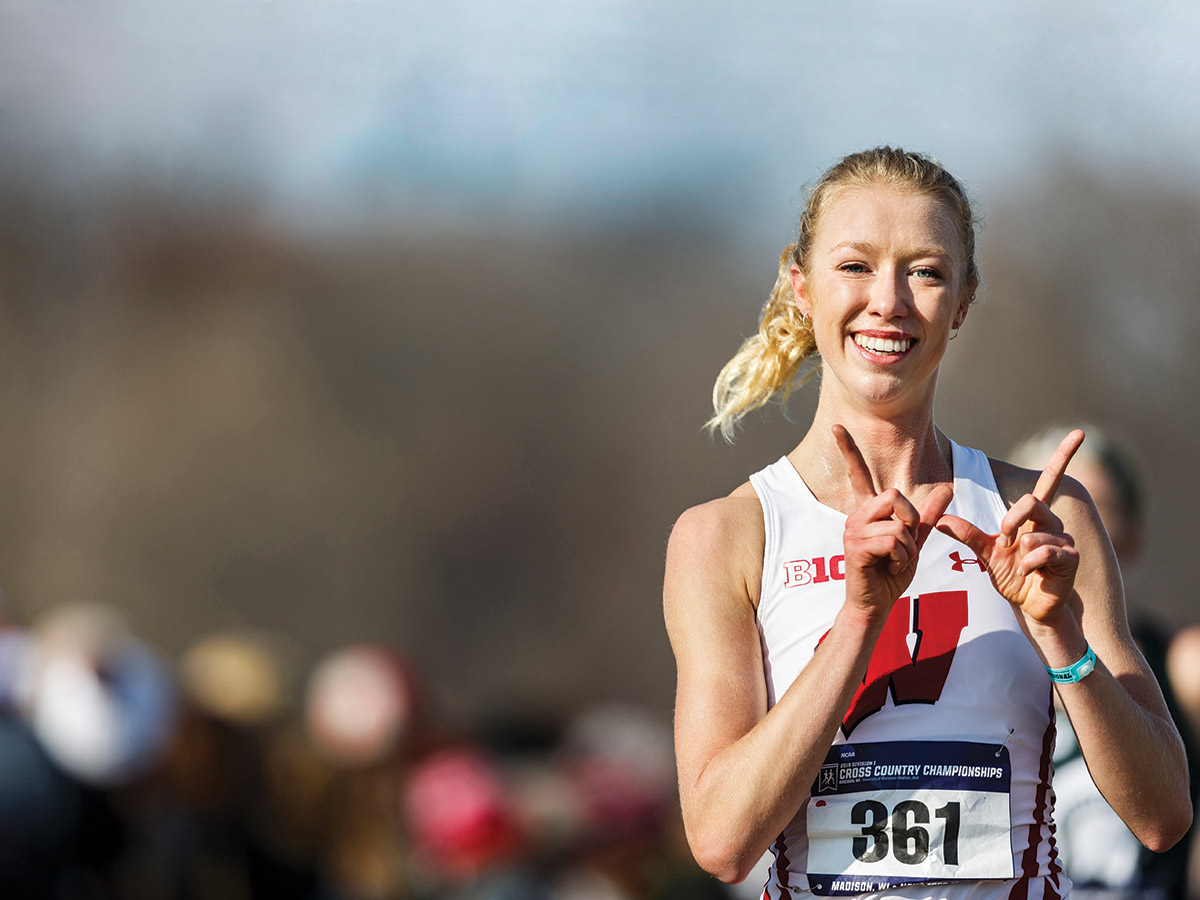 In spite of a foot injury, Monson pushed through for the national title.

The middle-distance runner earned her first national title in early 2019 for the 5,000-meter race at the NCAA indoor championships. That same year, she also won the 3,000-meter race during the prestigious Millrose Games in New York City, where she broke the UW and Big Ten records and earned the third-best time in NCAA history. She has also been recognized with accolades such as First Team All-American, Big Ten Indoor Track Athlete of the Year, and Big Ten Cross-Country Champion.

But these victories and titles alone don’t demonstrate why Monson is tough (and tough to beat). She also has a strong mentality in the face of adversity.

Monson missed the majority of the 2019 outdoor track-and-field season last spring due to a foot injury resulting from overexertion. Although she was beginning to feel the injury during that winter’s NCAA indoor championships, she pushed through for the national title.

“It’s incredible to know that even though I was hurting a little bit, I was confident in my skills and in my ability to actually win,” Monson says.

Coming off the injury in the 2019–20 season, Monson didn’t miss a beat. She won the 6,000-meter race for a second time at the Nuttycombe Wisconsin Invitational in fall, and she took first in the 5,000-meter race at the Big Ten indoor championship earlier this year.

It wasn’t her first confrontation with injury in her athletic career. During her senior year of high school — shortly after being recruited to the Badger cross-country and track-and-field teams — Monson tore her ACL playing basketball.

“The ACL injury taught me exactly how to … make sure to do the little things that’ll help me come back better than I was before,” Monson says. “It’s a huge mental struggle.”

Monson grew up in Amery, Wisconsin, where she was involved in volleyball as well as basketball. She first decided to try track and field in middle school, following in her older sister’s footsteps. When she demonstrated a knack for the sport, a friend convinced her to quit volleyball to join cross country during her freshman year of high school. After official visits with UW–Madison, the University of Minnesota, and Iowa State, Monson wanted to attend the UW for both its strong academics and distance-running history.

“[Miller] definitely cared about how you were outside of running, so I really appreciated that,” Monson says. “And having a woman as a coach was absolutely awesome. I had Jill for three years, and she taught me a ton.

“I think that there absolutely need to be more women coaches and women in power. Jill [showed] that you can have confidence in whatever you do.”

Although Monson was initially nervous about a coaching change during her senior year, she says she also looks up to the new head coach for women’s cross country, Mackenzie Wartenberger.

“To have another woman coach who’s so knowledgeable is really awesome,” Monson says, noting that Wartenberger, also an assistant track-and-field coach, is helping Monson prepare for her goals to become a professional runner and to eventually medal at the Olympics.

During a senior year filled with change and unpredictability, Monson has remained resolute. After the 2020 spring season was canceled due to the coronavirus outbreak, the UW, in contrast with the NCAA, announced it would not extend eligibility for seniors to compete in 2021.

“The announcement made my decision easy, but it was still sad to think that I wouldn’t have the opportunity to compete in my senior season as a Badger. However, I know the UW is trying to keep the bigger picture in mind to try setting people up in the best, most concrete situations possible,” she says. Monson is grateful for the opportunities the university has provided her and is most proud of the relationships she’s built.

When asked what it means to her to be a Badger, she answers with little pause.

“One of the things that I think of a lot is being ‘Badger tough,’ ” she says. “That’s one of our sayings, and I think it really just shows that anyone from Wisconsin is going to come to a race, or come to training, or come to an exam for school just being ready to give their best for the day. I think it definitely speaks a lot to our determination.”

Monson exemplifies this motto, perhaps best shown during her 5,000-meter race at the 2019 Big Ten indoor championships. She cheered on teammate Amy Davis ’20, who stayed close behind Monson as they neared the finish line — resulting in first- and second-place finishes for the Badger athletes.

“When you’re going into the last lap of a race and you’re already tired, it’s pretty difficult to cheer on your teammate,” Monson says as she reflects on the moment. “[But] knowing that if I can be there for her when she needs it, I’m definitely going to do that.”