K’Andre Miller is the latest star to emerge from “Defenseman U.” 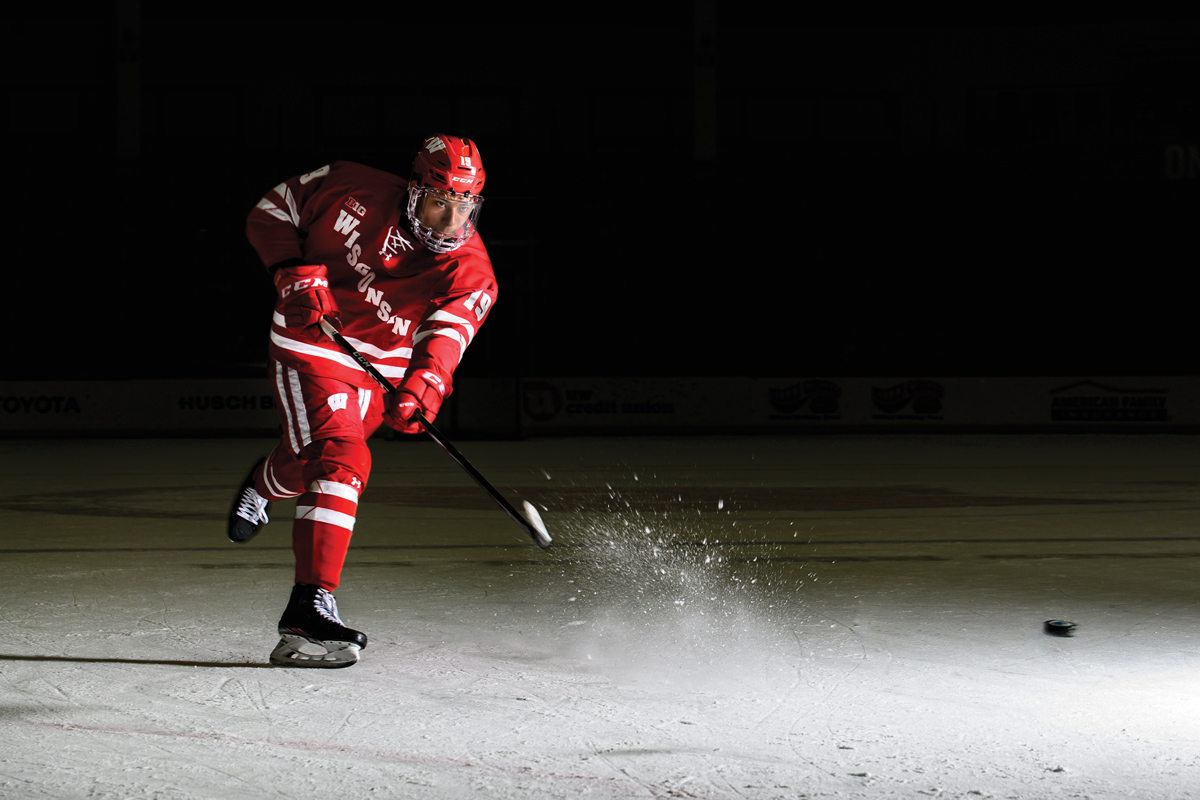 Miller isn’t sure how long he’ll play college hockey, but he’s already had an outsized impact on the UW program.

Hockey is not for the weak-spirited, and Badgers star defense-man and top NHL prospect K’Andre Miller x’22 has made a habit of proving his mettle.

As the smooth-skating Miller glides to the puck during a practice drill in October, he’s struck in the neck by a teammate’s stick. The hit leaves the 6’5″ sophomore slumping and noticeably aching — but still skating. No one consoles him when he heads to the bench for a line change, save for an assistant coach who encouragingly taps him on the kneepads with a stick. Minutes later, still wincing, he reenters the fray and swiftly bulldozes the offending teammate. No one flinches at the act, and the feud is over, because this is how hockey works — even among friends. 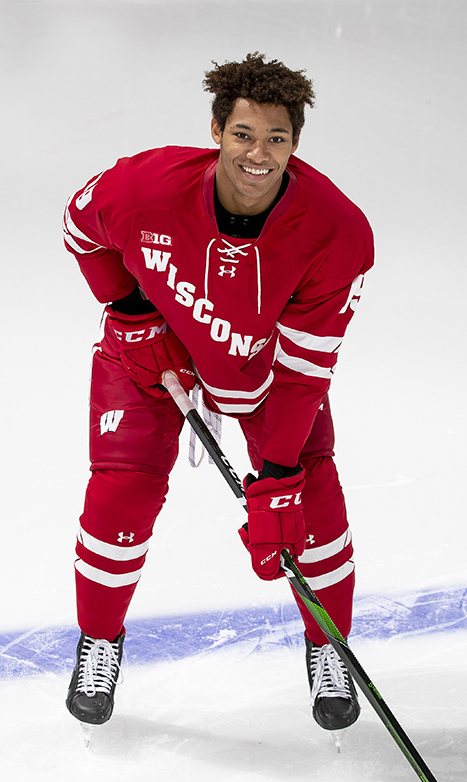 Many players say it, but Miller means it: hockey is his life. He started skating when he was two years old as his uncle taught him the sport. What does he want to do after his hockey career? “Hockey,” Miller responds without hesitation. Why did he pick communication arts as his major? “Easy credits, I guess,” he says with a laugh and his wide smile. That smile came in handy in his younger years, when he briefly modeled for Target ads and appeared in a Honda commercial with former NHL star Mike Richter x’88.

The New York Rangers traded up to the 22nd pick in the 2018 draft to select Miller, whom they now consider a top-three prospect in the organization. The team has been content to let him develop in Madison, where head coach Tony Granato ’17 and defensive guru Mark Osiecki ’94 have earned a reputation for cultivating professional talent. Osiecki has coached more than a dozen future NHL defensemen, and Miller will soon join the pro ranks of Badger legends like Chris Chelios x’83, Ryan Suter x’04, and Ryan McDonagh x’11. (An ESPN article in October referred to UW–Madison as “Defenseman U.”)

“The coaching staff here you won’t find anywhere else,” Miller says, noting that it’s the top reason he chose to attend the UW over other colleges.

The Minnesota native, an only child of a devoted single mother, takes none of his success for granted. When asked to describe his upbringing, his long pause — for a poised person scarcely at a loss for words — says it all.

“Tough,” he says after collecting his thoughts. “Not the most fortunate. But my mom did everything she could do for me, and I got here through all of her dedication and pursuit.” One sign of his mother’s commitment: working overtime to replace broken hockey sticks.

Among Amy Sokoloski’s other sacrifices was allowing her son to leave home at age 16 to play for the USA Hockey National Team Development Program in Plymouth, Michigan, where he quickly impressed both the Badgers and the Rangers with his elite combination of size and speed.

Although he’s a defenseman, Miller likes to think of himself as a “fourth forward” — a chase-down defender with a knack for the opportune offensive attack. Last season, the left-handed shooter led the Badgers with 22 points (five goals and 17 assists) before he suffered a season-ending knee injury with 11 games remaining. He earned the team’s Mark Johnson Rookie of the Year award and a spot on the Big Ten All-Freshman Team.

“You see a little bit of flair in my game, where I wish I was still playing forward sometimes,” Miller says, laughing. His versatility stems from playing the forward position until his second year of high school.

One of the NHL players Miller models his game after is Seth Jones of the Columbus Blue Jackets, whose stature and speed mirror his own. In 2013, Jones became the first African American player to be a top-five draft pick. The league has long lacked diversity, with some 30 active players of color spread across the 31 teams.

“I don’t really see it like that,” Miller, who is also African American, says of the sport’s lack of representation. “I’m different than a lot of these guys, but they see me, and I see myself, as just another hockey player.”

Despite speculation that Miller would turn pro after his freshman campaign, he returned to Madison for a second season. “I want to win a national championship,” he says. He’s not certain how long he’ll play college hockey, but his head coach believes he’s already had an outsized impact on the program.

“The skill part — the size, the mobility — you can see,” Granato told media last season. “What you don’t see as a fan is the work ethic, the competitiveness, and the kid himself, and why he is so special. … As a coach, when you recruit, you’re looking for character to go along with the skill, and when you find one of those guys, you get real excited. Well, he’s lived up to it.”