A Variation on Camelot Forty-three years ago, I came to the University of Wisconsin. I was a California girl who had come to study English in graduate school. Madison was like Berkeley, my friends told me, only people had more common sense. With a part-time job as a teaching assistant, I settled into a student house near State Street.

I knew nothing of cold when I arrived. Within my first month, I learned about days that were bright and clear, but could numb me by the time I arrived at the library. By winter, I marveled that people had babies in such a place. Seeing parents pushing strollers in the slushy streets made me think of Eskimos. How could human beings survive such killing cold?

But then came the spring, when I discovered the Arboretum. I would ride my bike there and wander among the lilac groves. “That is no country for old men,” the poet Yeats wrote. “The young in one another’s arms …” I was a lonely grad student, unwarmed by any other person’s arms. Maybe because of that, I was moved to my soul by the intoxicating perfume of all those pale purple blooms.

Wisconsin wooed me all that first spring, softened me so that I fell hopelessly in love once the summer arrived. It was all so lush, such a burst of leafing, flowering, buzzing life. Green, green, green! I had never seen anything like the lushness of a Midwestern summer. It was like being in the tropics. The few times I was able to get out into the countryside surrounding Madison, I could smell the sweetness of clover alongside the roadway; I was stunned by the elegance of thistles and day lilies growing in the ditch.

And then came the fall, when I discovered the lakeside path to Picnic Point. Walking under the canopy of crimson maples, crunching in the rustle of coppery oak leaves, I experienced a whole new round of intoxication.

In the course of my first year in Madison, I fell in love with the place. I could sing the song of Lancelot in Lerner and Loewe’s Camelot:

If ever I would leave you, how could it be in spring-time?
Knowing how in spring, I’m bewitched by you so?
Oh, no! Not in spring-time! Summer, winter, or fall!
No, never could I leave you at all!

What I know now, that I didn’t understand as a young, transplanted graduate student, is the deadness of long winters: the deprivation of light, the preponderance of darkness, the blighting of my spirit that comes from too much time spent indoors. Wisconsin winters are hard.

Yet here I am, glad to be living here still — facing the coming snowfall and soaking in this afternoon’s sun. The leaves have just begun to turn. None of the plants in our garden have been withered yet by frost. It is glorious to be alive in this place on this September day. My relatives in California think I am crazy to have settled here after my studies in Madison. But they do not know the rhythms, they do not know the scope, they do not know the splendor of this Wisconsin place. I do know it. After forty-three turns through the seasons, I have set down roots in this place, and those roots sustain me. 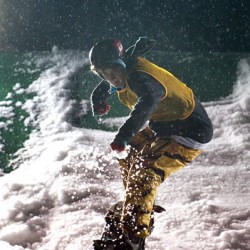