UW geology students have been studying at White Lake since the 1940s (inset). Alumni from past years, including the 1970s (above), attended a reunion trip last fall to revisit the site and reconnect with classmates. Carl Bowser-Silver Pixel Images; Inset, Courtesy Of R.C. Emmons.

Fresh off a summer of geological mapping in northern Ontario, Canada, R. C. Emmons PhD’24, a UW–Madison geology professor, realized the area would provide an excellent laboratory for students to apply what they were learning in the classroom.

Emmons organized a class and drove his students across the border to an area called White Lake, where they spent their days tramping across the hillsides in search of geologic clues and their nights in a simple tent camp.

More than seventy years later, the course, now Geoscience 457, is a popular annual offering with more than one thousand alums, says Professor Philip Brown, who has led the class for fourteen of the past twenty-five years. A few things are different — the class is now coed, and the participants sleep in rustic cabins rather than tents — but the tools available to the students haven’t changed much over the decades. They still use topographic maps and compasses for orientation, and hand lenses and rock hammers for examining samples.

The students spend a week in the field. Their task: view enough of the area’s geology to make a color-coded map defining the surface rock layers across the entire region, then draw a cross-section showing the layers’ three-dimensional structure within the earth.

It’s a challenging assignment, Brown acknowledges. “There is a right answer, but no one knows it exactly,” he says. “The geology is complex enough to be interesting, but not so complex as to be impossible.” Professional maps of the area exist — it was once a prime uranium-mining district — but not with the level of detail he asks from his class.

In a few classroom sessions before the trip, Brown gives the students an overview of the main rock types and offers hints about distinguishing clues to look for in the field. The fifteen students pass around rock samples, scribbling notes and trying to commit enough details to memory to recognize them in their geologic context.

The rocks tell the history of the area, from violent seismic and glacial disruptions to gently lapping seas. The region has some of the oldest, best-exposed evidence of continental glaciation, Brown says, with 2.2-billion-year-old rocks that are invaluable to studying the history and causes of ice ages.

Adding to the challenge, the area is heavily forested, and students must find rocks that are exposed in small outcroppings or road cuts. From those data points and their best geological inference, they fill in the gaps and draw conclusions about the underlying layers with all their folds, fractures, and faults. The assignment allows the students to immerse themselves in the real-world practice of what they’ve been studying and pushes them to synthesize years of coursework, Brown says.

“It’s nice to go out in the field and realize you know so much more than you did in any one class,” says Faith Zangl x’13, who has a geoscience/geological engineering double major.

Back in camp each evening, the students compile their field notes and start sketching in a map based on the day’s observations. They are primarily graded on whether the map matches the observations in their notebooks and follows a consistent internal logic.

“The ways you take notes and everything, working together as a team — that’s what’s really going to stick with you,” says Brigitte Brown x’13, a senior majoring in geoscience and geological engineering.

Last fall, Philip Brown organized a reunion trip, during which class alumni from the 1960s to the 2010s could revisit earlier days of camping and camaraderie.

“It’s one of the most enjoyable teaching assignments I could have,” he says. “[I’m] spending a week with ten to fifteen good students, doing what many geologists became geologists to do: be outside looking at stuff.” 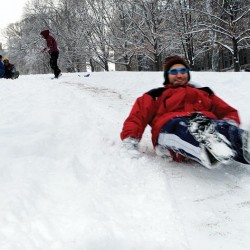